The refugee camp at Hara Hotel got its name from what it was before the crisis, a hotel named Hara. I never met the owner formally, but I spoke with his relatives who also owned the hotel and gas station out front. Mr. Hara is named so because that was the general perception of him; Mr. Shit. (Hara means shit in Arabic.)

Volunteers particularly disliked him because he refused to comply on basic tasks. His staff was told to refer to him for every query on the property. If we wanted to set up kid’s corner in the shade under the supermarket, his brother required that Mr. Hara phone him to confirm that it was allowed. But it wasn’t allowed. 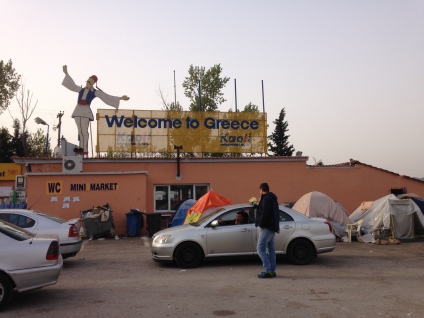 Mr. Hara charged ten euros per warm shower in his hotel. The gas station down the road charge zero, one or two euros. A room for the night was 60-70 euros. A packaged 7-days croissant was 2.50 euro.

Mr. Hara was a rotund man of probably 50, and he seemed to keep his employees in order through intimidation. I once needed to borrow a knife from the kitchen, but all I could find were flimsy plastic ones. I asked a Syrian woman who worked in the kitchen and she asked the head chef. The head chef immediately said, ‘Everybody want knives, and they disappear. [Mr. Hara] laughs at me every time. No knives.’ And she turned her back to me.

Mr. Hara had two brothers. The younger worked in the hotel with him. He was pleasant: when I came to him in search of soap after cleaning the trash, he would give me plenty for myself and a refugee helping me. He would unlock the bathroom door for us but quickly lock it afterwards.

The older brother looked like his twin. He owned the other part of the lot; the gas station (which had a large sign above it reading “Welcome to Greece”). Anything done there had to be approved by Mr. Hara first. Frequently we would borrow a table to do some distribution in the mornings, but as soon as the younger man’s shift ended in the afternoon and the brother began working the desk, he refused us the table. He didn’t understand English or our hand motions, although he had no trouble understanding at other times.

It’s hard to expect much else form the Hara brothers. Hara used to be the first stopping point for every car coming in from Macedonia. It had a gas station, restaurant, and hotel. at least 100 tents now surrounded the property and deterred, if not precluded, others from stopping at the point.

But the volunteers justified part of their work at the camp and the refugees’ say there by the lack of business the hotel would have received. Hardly any cars passed on the highway and even fewer on the road Hara was on. If the refugees had not been there, the business may have simply collapsed under the pressure of the Greek economy’s meltdown.

It wasn’t in a particularly good shape before the refugees came last year. It’s still not in good shape, but at least they have cashflow. If he wanted, he could have had every refugee removed from his property, but he let them stay because they brought money. Letting them stay also meant that he was in a powerful position and was able to leverage it to prevent people from becoming too comfortable.

Volunteers wanted to give refugees access to warm showers. Some walked a half hour to the river to wash themselves or their hair, and others could never fully wash themselves without paying the ten euros for a shower. We negotiated with Mr. Hara, and he agreed to charge us 2,000 euros a month for warm water in the showers. After a few days, he hiked it up to 2100. We got angry.

But around the other side of the building, water flowed from two hoses 24/7. Even if people weren’t using his showers, the water bill must have been enormous. I never heard him complain about that.

View all posts by ianjmorse